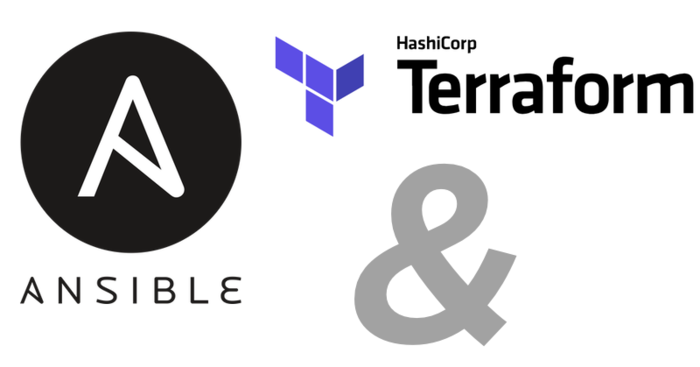 A while back now, I decided that I wanted to eschew one of the tenets I employ in my day job - everything is automated, everything is repeatable. My personal infrastructure setup was a little haphazard at the time, with a couple of EC2 instances that were set up a while ago as pets and that I manually kept on top of - something I was becoming more and more aware was a bad idea. I decided to tear it all down and start again.

That left me with the task of deciding how to do it.

Terraform for most engineers has been the de facto standard for some time. Released and supported by Hashicorp, it links into multiple cloud providers and has the flexibility and extendability to work well in a variety of different circumstances. Terraform was a natural choice for building out my AWS-level infrastructure, and for acting as the orchestrator for all of my other integrations.

Second was how I configure the servers once they're in place. I thought a bit longer about this, as Packer is an excellent tool for compiling a set of images to spin up, but my use case with Jenkins meant I wanted to be able to continually configure the instances once they were running. This led me in the direction of Ansible for a few reasons. I usually gravitate towards Ansible by default due to its Python and YAML choices, preferring this over the likes of Puppet and Chef which use their own complexities. Ansible would allow me to create a set of roles and tasks relatively quickly, and to iterate on my instances once they were in place.

Now I had to think about how I link the two of them together - what I didn't want to do was feed Terraform outputs into a static file and drive Ansible separately, needing to hold some external state. I wanted Terraform's state and knowledge of the EC2 instance details to be automatically fed into Ansible on each run, such that building and updating the infrastructure would be driven from a terraform apply command.

To follow along, you'll need the following installed on your local setup:

That's it! Part of the goal was to create a repeatable process, and compiling the tooling into a Docker image meant that I wouldn't run into any problems on different devices with different setups and version incompatibilities, I could happily run this locally, from within Jenkins, or from within a remote EC2.

Plus an SSH key pair installed at ~/.ssh/id_rsa and ~/.ssh/id_rsa.pub that will be used to configure the EC2 instances in AWS.

Code examples are included inline all the way through, but you can also head to https://github.com/jamiefdhurst/terraform-ansible-example for the full reference example.

For this simple example, this will create an EC2 and install nginx on it, no more. You can expand from there as your needs require.

A simple Dockerfile could work as follows:

This is based on a Terraform image and installs Ansible on top of it, along with copying in the SSH key that is going to be needed to access the instances. It then calls Terraform by default, but that's it, nothing more.

Now building and starting this Docker image through the CLI can get a bit onerous, so I decided to wrap some of the repeated commands inside of a Makefile:

This allows me to run the following commands:

It also passes in environment variables such as my AWS credentials, and the SSH key into a format I need to configure via Terraform.

To get started, create a file in your setup state/main.tf and add the following:

Now you can run the following commands to initialise your remote state:

You'll be prompted to apply your changes, go ahead.

If you check your AWS account, you should see the services in place:

Now you're ready to build your first instance.

I'm going to be skipping any of the usual security restrictions and VPC separations that would be in place here to simplify the example. Create a main.tf file in your setup and add the following:

This TF script is going to create a VPC, a set of security groups and an associated EC2 instance. To set things up a little more securely, you may want to adjust the script above to only allow SSH from your own IP.

If you run the following now, you'll get your instance configured and set up:

Now your instance is ready, it's time to install something on it. For simplicity, let's get nginx installed and ready, giving you a foundation to set up more roles and responsibilities over time.

Create your Ansible config file first of all, in ansible.cfg, this will match up the SSH key on the Docker image and turn off those cows:

Next, configure your instance-level playbook in ansible/my-instance.yml:

And finally, define a role by creating ansible/roles/nginx/tasks/main.yml:

It's very simple, but it'll do the job. Now, in order to run the Ansible on your EC2 instance, it needs to be linked into Terraform.

Some adjustments will need to be made to your EC2 creation to ensure your instance has what it needs to support running an Ansible playbook. In your main.tf file, add some userdata into your EC2 instance resource creation as follows:

Next, we need to create a new resource to trigger the Ansible command. This will run on each terraform apply and will wait for your instance to be healthy before it triggers via the AWS CLI. Add it before the output in your main.tf file as follows:

Now run make apply one more time, and your ansible should trigger and install ngix. 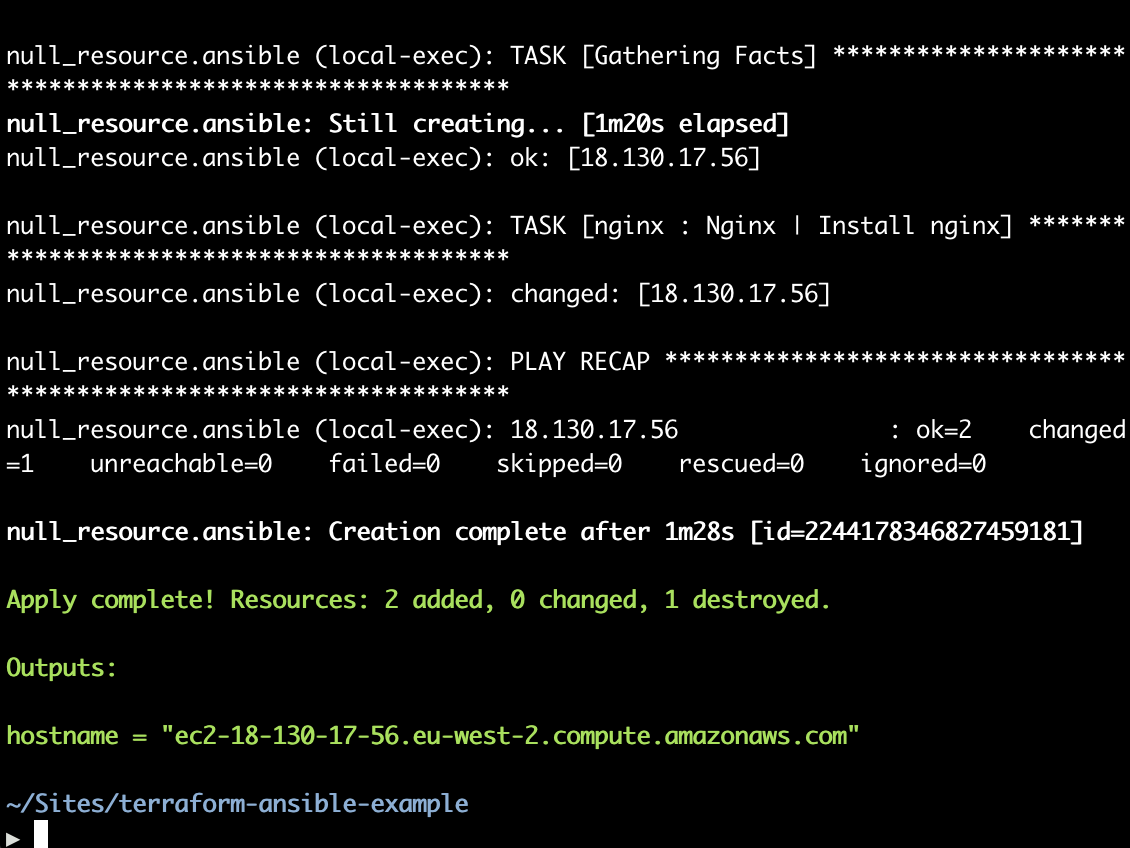 Now if you grab the result from your output, e.g.:

You can head to, for example, http://ec2-18-130-17-56.eu-west-2.compute.amazonaws.com in your browser and see the resulting install working:

Now think about how you can expand this to do what you need!